The Library of the Roman College 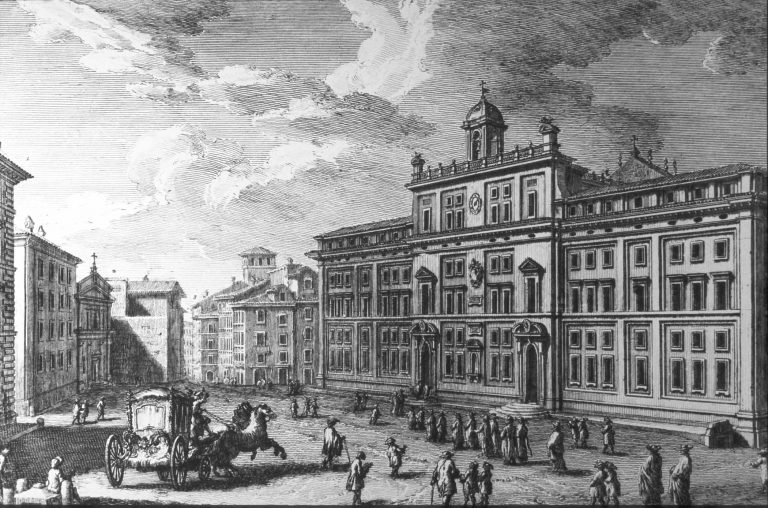 The first core of the Library was established in February 1551 along with what would be called the Roman College. In 1581, following various relocations due to an increasing number of students, Pope Gregory XIII granted to the Jesuits a prerogative of 6,000 Scudi for the construction of a new headquarters. The Pope was called the “founder and protector” of the College and, subsequently, the Pontifical University, the direct continuation of the Roman College, would be called Gregoriana in his honor. The value of the Library is reflected in the general catalogue of the Bibliotheca Maior, consisting of 12 in folio volumes for a total of about 40,000 entries, drawn up in the mid-Eighteenth century, most likely based on a catalogue of the previous century and on the inventories of the specialized funds compiled since the second half of the Seventeenth Century. The Bibliotheca Maior was also known as a “Bibliotheca Secreta”, in a sense that it was separate, distinguishing itself from the private collections of the Fathers and from the smaller libraries for specific use of professors and students; it was only accessible to professors and superiors residing in the College, for whom also loan was granted.

«The books in the Library reach almost eighty thousand: their room is vast, and it has the shape of a Latin cross; in addition, there are five more rooms added on one side. Amongst many books there are significant ones regarding Scripture, Theology, Ecclesiastical History, Greek and Latin Classical Literature, Profane History and Archeology. At the top of the polished walnut and decorated bookshelves, there are oil portraits of many illustrious Jesuits, and facing the entrance door, Gherardo delle Notti painted a large Last Supper of Jesus Christ with the Apostles. Inside the College there are also four smaller libraries for the use of the four classes of people who teach and study; they can take the necessary books out according to their needs. Volumes contained those libraries (in one there are books for a special use of the Jesuits) amount to thirty thousand».

In 1873, three years after the annexation of Rome to the newborn Kingdom of Italy, the Roman College had to definitively leave his historic seat and move to the Borromeo Palace in Via del Seminario. The first and the most important nucleus of the future National Central Library of Rome will come from the Library of the College. Pope Pius IX, with a rescript of December 4th, 1873, allowed the Roman College to take the title of Gregorian Pontifical University of the Roman College and conferred the Rector the right to endorse himself as a “Rector of the Gregorian Pontifical University”.

The Library of the Gregorian Pontifical University 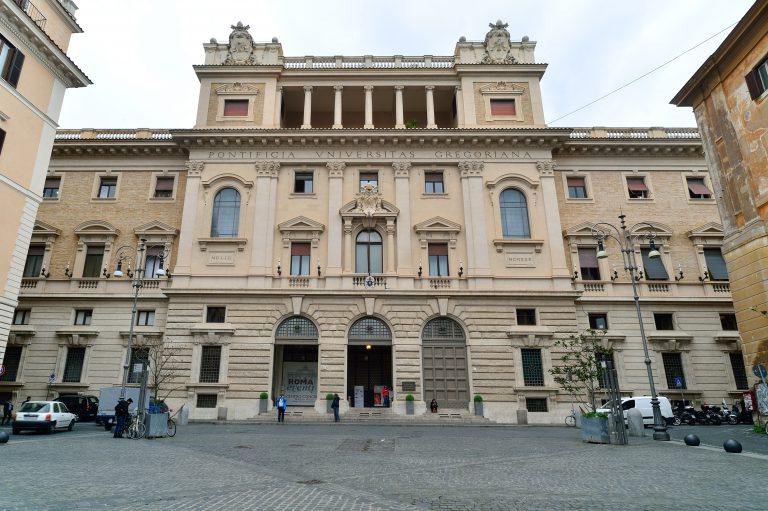 Since part of the Bibliotheca Maior has remained at the "Vittorio Emanuele II" National Central Library, which also preserves its old catalogues, the Library of the Gregorian Pontifical University can be considered an outcome of a tireless reconstitution: in 1930, at the inauguration of the new headquarters in Piazza della Pilotta, its patrimony amounts to about 150,000 volumes. A detailed report for the years 1934-1935 (APUG, Fondo Rettorato Antico, cart. 50, Relazione sulla Biblioteca durante l’anno 1934-1935. Translated by the Library) gives us a breakdown of places, activities and services at the dawn of the new era:

«In July 1934, the Library had a single consultation room with 48 seats. […] the question was raised how to accommodate about 200 students in the Library. In order to solve such a problem, it was necessary to transport the magazines and the card catalogue from a consultation room to an adjacent room […]. […] Thus, the innovations made in the consultation room could accommodate 80 people.
This room, because of its copious consultation material (about 35,000 volumes) was intended for graduate students. For others, another 90-seat room was built, which was furnished with books from the storage room. […]
In order to coordinate the control of access at the Library entrance, a cloakroom service was set up. Thus, users were requested to show a valid admission card to the Library Attendant assigned to the cloakroom.
Such a system allows precise verification of the frequency of scholars’ attendance».

«Considering its premises, the present Library is truly great: located on the first floor of the vast building, it includes a consultation and a reading room with annexes for professors and for the librarian. It has also a six-story building built specifically to serve as a storage area for an estimated 500,000 books.
Shelves, attics and stairs are in iron and meet the most modern needs. The assets consist of about 200,000 purchased volumes, in the consultation room there are about 40,000 volumes arranged by subjects: Philosophy, Theology, Sacred and Profane History, Law, and so on, divided by countries. […]. There are about 70 incunabula. The Library does not preserve manuscripts; some can be found in the Archive. The Library receives numerous journals, about 400, through exchange or purchase. […] The Library is open to the public, but it is necessary to have a card issued by the Library Director».

The Library is universally known as a prestigious cultural institution, particularly in theological, philosophical and historical profiles. From an organizational and managerial point of view, the Library directly depends on the Rector. It is a centralized structure that manages the entire documentary heritage pertinent to the sectors of separate disciplines taught at the University and it is strictly involved in the processes and activities that relate to teaching and scientific inquiries.