The Library has over 3,700 hard copy titles, of which nearly 1,300 are current subscriptions and over 400 available also in electronic version.

The entire collection is freely and directly accessible for consultation, with the exception of periodicals published before 1861, those belonging to Special Library Funds, and those in big format. To view the periodicals not available on open shelves, you have to submit a special request at the Distribution and Handling of Patrimony Service.

The collection is distributed in several spaces, accessible from the walkways of the two main reading rooms. Specifically, the Walkway of Reading Room 1 holds loose issues of the current year of all subscribed titles. Issues of previous years are bound and placed on shelves in chronological order; volumes of the same title have the same call number and all titles are positioned according to the subject area of specialization (classification system). 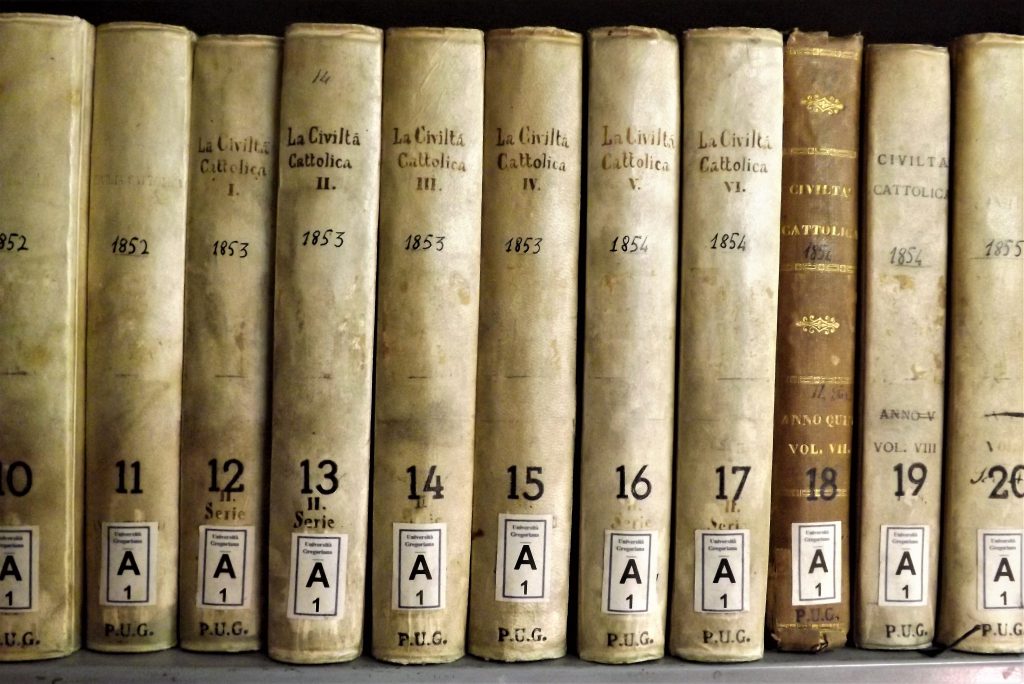 To semantically classify the periodicals owned, manage their conservation, and facilitate their retrieval and usage, the Library has adopted a system that allows to group them both conceptually and physically, in relation to the main discipline of specialization covered by each.
The classification system consists of 27 classes, using the letters of the alphabet. Thus the positioning of periodicals is designated by a letter of the alphabet corresponding to the specialization class, followed by a number.
The chart below shows, in alphabetical order, the disciplinary areas followed by the letters used to classify them, and location details for each class.

All printed and electronic periodicals acquired through single subscriptions are catalogued and accessible directly via catalogue. In addition to the usual parameters, advanced search allows the selection of results through two filters: for the entire Periodical Collection and for the Current Periodicals Section.

In order to find out in real time which are the latest printed issues that has arrived in the Library, it is possible to use the ACNP Catalogue: once you’ve searched for the journal title, selecting the item “Holding→ Issues received”, you will get the list of the most recent numbers.

Since 2017 the Library has participated in the ACNP URBE project that allows federated research in the periodical catalogues of the Libraries that joined the Network.

At the end of the year, periodical issues are bound in volumes. By checking the list of periodicals at binding, it is possible to verify which titles/years are not currently available in the Library.

The catalogue includes electronic periodicals for which the Library has made a direct subscription. Access to the entire collection of electronic periodicals, including titles available through databases, along with a selection of open access publications, is done through the Full Text Finder virtual catalogue, where it is possible to search for periodicals by title, ISSN or subject. For each link it is specified the source that hosts the content (database, platform or other) and the coverage (accessible years).

The Library offers training sessions on periodicals and is also available to arrange targeted meetings upon request by contacting the Management.