Library patrimony amounts to approximately 500,000 books, of which about 50,000 are available on open shelves and therefore directly accessible to users. Areas of specialization reflect the disciplines for which the University offers training, and in which it carries out studies and research activities: Theology, Canon Law, Philosophy, History and Cultural Heritage of the Church, Missiology, Social Sciences, Spirituality and Psychology, Arts and Literature.

All collections are catalogued and may be searched via catalogue; the 5 card catalogues were closed on September 30th, 1992.

The Main Library Fund is molstly preserved on the 6 floors of the Warehouse Tower, the frequently consulted books, encyclopedias, manuals and reference works are available on open shelves in the reading rooms. 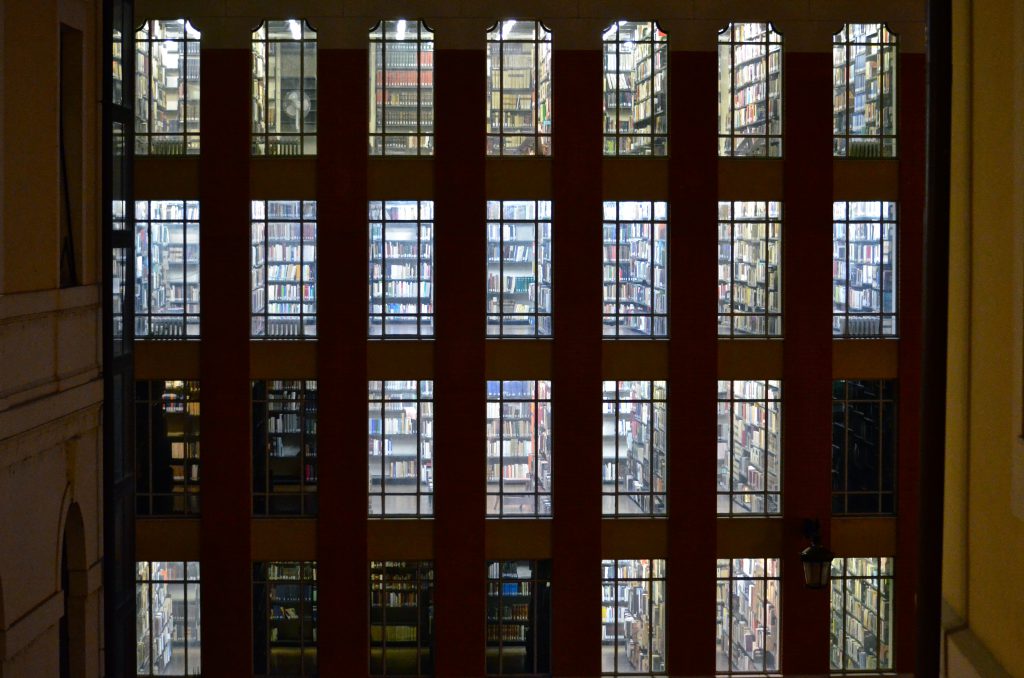 The Fund, traditionally called “Riserva”, includes ancient, rare and precious publications that are part of the Library heritage. It consists of approximately 33,000 documents: incunabula, books printed in the XVI century – cinquecentine, and works printed up to 1830. They are stored in a large room, equipped with compact shelves and an environmental parameter control system, located in the Traspontina wing of the Central Building. The 50 incunabula of the collection were published in a catalogue in 2008.

The Fund preserves over 20,000 doctoral theses, of which about 7,000 are kept in the Thesis Room, specially dedicated to the theses of the Gregorian Pontifical University.

The SIDIC Fund is a collection of about 7,000 books on the interreligious dialogue between Christians and Jews, which was donated in 2001 by the International Judiciary and Judicial Library service to the Gregorian Library. This is a current fund, kept in the Traspontina Warehouse.

Instituted by Father Gustav Andreas Wetter as the Bibliotheca scriptorum Russorum, then Marxist Studies Center, the Fund is a large collection of publications concerning Russian and Soviet philosophy and literature, contemporary atheism and Marxism. The fund consists of about 42,000 volumes, and is stored in the Traspontina Warehouse.

The Fund, with its 3,000 books, illustrates the cultural and artistic interests of Maurizio Fagiolo dell’Arco, an art scholar, a collector and a bibliophile who dedicated his life, intense years of work and studies, to a rich library concentrating on the Baroque. The Fund stored in the Traspontina Warehouse is closed, and in 2010 a catalogue of its collection was published.

The Fund, a collection of about 4,600 books, was the private library of the Professor Giuseppe Vedovato and covers mainly topics related to humanities and social sciences, reflecting the cultural interests of its founder. This closed fund is also stored in the Traspontina Warehouse.

The Vedovato European Library Fund consists of about 35,000 books related to 20th-Century history, issues related to the European integration processes, international relations, government and diplomatic history. Collected by Senator Giuseppe Vedovato during his political activity at the Council of Europe in Strasbourg, the Fund is closed and stored in the Traspontina Warehouse.

The collection of documents issued by the Congregation for the Causes of Saints related to beatification and canonization is currently composed of approximately 2,000 books and it is kept in the First Walkway of the Distribution Room, not directly available for users since its catalogation is not complete yet.

In order to classify the patrimony by subject, manage its conservation, and facilitate data retrieval and consultation, the Library has created two classification systems, one for monographic works and one for periodicals; it allows the grouping together of resources, both conceptually and physically, according to discipline and areas of specialization. Classification codes can also be used as a search key in the catalogue.
The classification system for monographs consists of 910 classes of arguments, marked by an Arabic number, and by number of sub-classes, identified by one or more letters in alphabet.
For example the class 15 – Sacred Scripture on the Studies of the New Testament consists of the following sub-classes:

The classification system for periodicals, on the other hand, is composed of 27 classes marked with a letter of the alphabet: